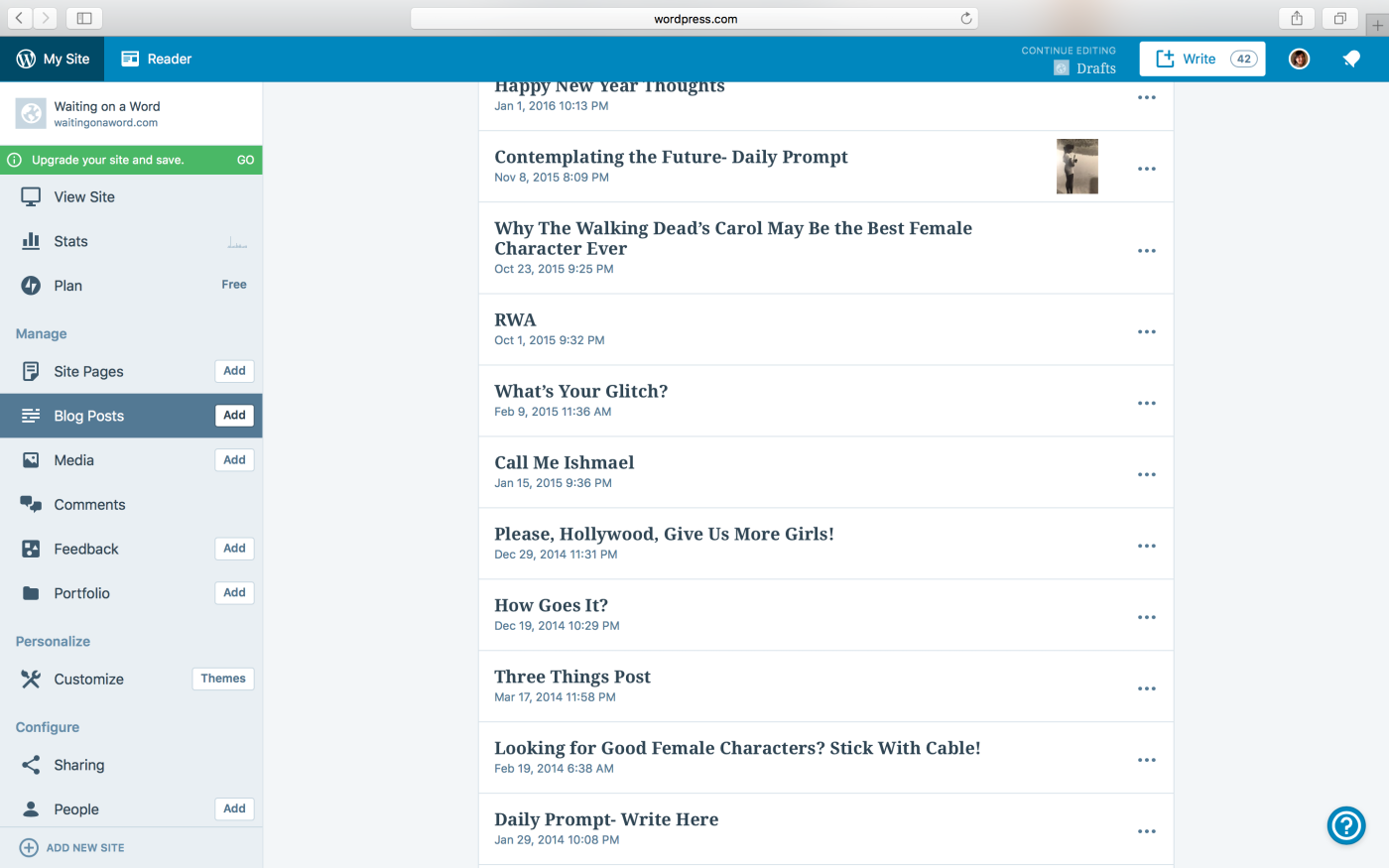 Having been absent from my WordPress site for some time, now that I’m back, the entire interface seems different (Where are the Daily Prompts? Are we not doing that anymore?). Up in the corner, next to my blog name, there’s a little number “41.”

Click on it and come to figure out that 41 means the number of draft posts I have in the can. FORTY-ONE!? Thought I’d delve into that bank of possibilities to see if anything could be revived, and here’s a sample of what I found: 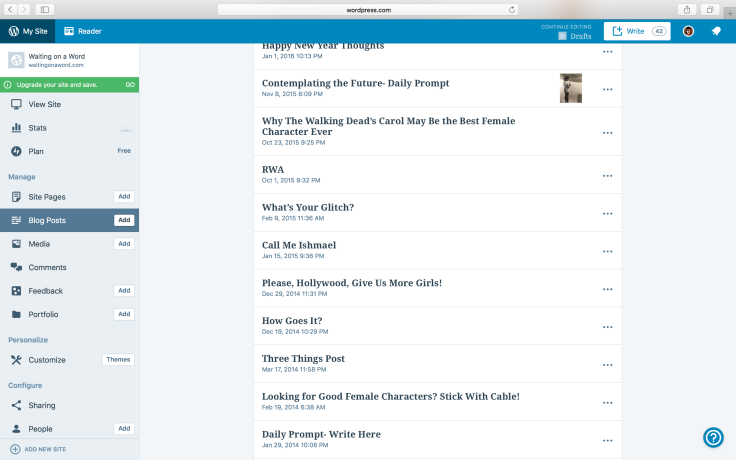 Call me crazy, but those titles made me think there may be some decent stuff in there. Well, not so much. But a couple were diamonds in the rough so I thought I’d share parts of them.

Here’s a sample of “Looking for Good Female Characters? Stick With Cable!” drafted on February 19, 2014…

Yesterday, I sighed in joy as I sat in the movie theater and watched American Hustle. It took me a second to figure out why.

In my quest to watch the films nominated for Best Picture prior to the Academy Awards, I’d been missing women. So far, I’d seen Dallas Buyers Club, Nebraska, and Captain Phillips. All boys (mostly). American Hustle featured boys, but also Amy Adams and Jennifer Lawrence in major roles. Finally. Let’s hear it for the girls!

Today, I talked with a screenwriter friend struggling with a female protagonist in her latest project. We tossed around ideas to give her character depth and purpose. She really wanted to focus on the character before tackling the plot. We decided to think about our favorite female characters in movies and why we liked them.

Interestingly, we couldn’t come up with much in the movie category. We wanted to stay away from the far ends of the spectrum– the sappy love/family-obsessed girl on one side, and the female cop/superhero on the other. There had to be characters that fell somewhere in the middle. Right?

On the television side, though, we had some success. Here’s a sampling of characters we came up with: Gemma Morrow (Katey Sagal, Sons of Anarchy), Nancy Botwin (Mary-Louise Parker, Weeds), Olivia Pope (Kerry Washington, Scandal), and Veronica Mars (Kristen Bell in a television series-turned-movie of the same name). These roles portray smart, determined women, who still exhibit human qualities. Gemma is ruthless, but nobody can question her devotion to her family; Olivia is brilliant, but has a soft spot for the President; Nancy is fearless, but makes questionable choices when it comes to her family and personal life; and what I learned about Veronica (I didn’t watch the television series) is that she’s witty and clever, but still enjoys the company of cute boys.

These four roles signify a diverse range of characters- an aging biker chick, an uber-successful overachieving DC lawyer/PR specialist, a California neighborhood housewife weed dealer, and a high school student moonlighting as a private investigator. But what they all have in common is that they fall in the middle of that spectrum– they are neither all-consumed by love and men and family, nor invincible superheroes. The beauty of their characters is that they linger somewhere in between.

So, hmm, why didn’t I post that? I think it’s a fair assessment for the time it was drafted. I don’t know. I’m guessing I thought it was boring, although reading it now makes me want to hit up Netflix and rewatch some of those shows.

Moving on… One of my favorite drafts in the folder is titled “2016: The Year of the Draft Posts,” which is sort of the post I’m writing right now. It had some nice insights, and I’m guessing it didn’t get posted because I stopped writing mid-list. I also think it’s funny that I had 22 draft posts at that time, and now I’ve jumped into the 40’s. Here’s a snippet:

I have twenty-two draft posts.

I looked through my Drafts and found some decent posts. I couldn’t figure out why I wouldn’t have posted them. I think the answer is that I’ve changed. Maybe in a good way, maybe not.

Back when I wrote those drafts, I was still scared to share words, especially words that shared little pieces of me. I thought my posts were boring (they may be), self-centered (they definitely are), and/or not well-written (some aren’t). But in the past year or so of publishing and authoring, I’ve learned a couple of things.

1.  Not everyone is going to like everything I write, and that’s okay. This blog is my corner of the internet world and it’s for me. So yes, it may get a little self-centered sometimes. It’s not professionally edited. I don’t have much advice about the craft of writing or other fancy things that people talk about. But I started this blog without a purpose–the Blogger Without a Cause. I like having the freedom to post whatever I feel like.

You may not like my posts. Those draft posts may be crap, but I shouldn’t be afraid to post them. They are all little nuggets of me.

Since I’ve written my last post, I’ve had some publishing success. My first book came out in January, my second in May, my third releases in November, and my fourth in May 2017. Guess what? They aren’t perfect and they’re out there, in the world, for people to read! Gasp! People seem to like them, but those one-star reviews are tough, especially when they actually make sense. It’s a lot easier to believe the few one-star reviews than the lovely five-star reviews, for me at least. It was rough going, but I’ve learned to celebrate the good reviews and ignore the bad (as much as I can–I’m only human).

2.  I write romance. It’s not meant to be world-changing or literary genius, and that’s okay, too. Romance isn’t for everyone, but to me, it’s an awesome genre. Love makes the world go around and trust me, it’s more entertaining than Moby Dick. If you don’t like it, I get it. I really do. But I yam who I yam and I write what I like to write. Please respect romance!

3.  Nobody cares about my words as much as I do, and that’s okay. I’m sure I’ve scrutinized the posts in my Drafts folder way more harshly than would any potential reader. I have to remember that I am my own worst critic. People will not hate me if I can’t control my comma usage or if I miss a typo. Nor will people love me because I wrote a post, or even a book for that matter. Writing a book is a great accomplishment, whether you become published or not. But you can’t take yourself too seriously. As wonderful as your words are, your book’s success or failure isn’t going to matter to most people in the world.  Same thing with my draft posts.

Re-reading this partial list, it’s still relevant today, and was a good reminder to not take myself too seriously. So thank you, Past Jess, for your insights!

If you haven’t given up on this post about nothing yet, you’ll be glad to know I saved the best for last. From my draft entitled, “Possible Celebrity Sex Dream #2,” drafted March 5, 2017. Now I have your attention again, don’t I (wink wink)?

Readers of WOAW may recall my dream scene involving The Rock and a baguette in my minivan. If not, click HERE for a recap. Sex dream? Maybe. Anyway, I had another one that I thought I’d embarrass myself and tell you about. Does this count as a celebrity sex dream? I don’t know. But welcome to this new series on WOAW… Possible Celebrity Sex Dreams.

Also, I had a total Seinfeld moment where I woke up in the middle of the night after the dream and made a note on my phone about it. Here’s what I wrote, word for word, typos in original:

Doesn’t seem very sexy does it? But here’s what happened in the dream.

I was in an elevator and I was kissing Barack Obama, who, I’ll add, was a very good kisser. I immediately thought Michelle would kick my ass so I pulled away and said something like “you’re married” and he told me that he and Michelle had an open marriage. Next thing you know we’re outside and there are horses and he tells me that Sasha likes horses. We get into a car and I’m wedged between my friend Nicole, Barack’s aunt, and Barack’s grandmother (Please note: I don’t know if he has any of these relatives). We start driving through a forest and it’s rainy and storming and a plane explodes in front of us.

I’m pretty sure that note that I made, translated into awake-speak, says: Sex dream Barack on elevator, open marriage, Sasha likes horses, Nicole and aunt and grandma for rain plane explosion.

That’s where I left off on that one. Now that I read it, maybe it was more like a “crush dream” than a “possible sex dream.”

Anyway, the moral of the story is: write whatever you want. You don’t have to publish everything, but the act of typing out the words that float around your brain has value in and of itself. There’s a Drafts folder for a reason, friends. May as well use the thing.

Again, thanks for reading, and have a nice night!