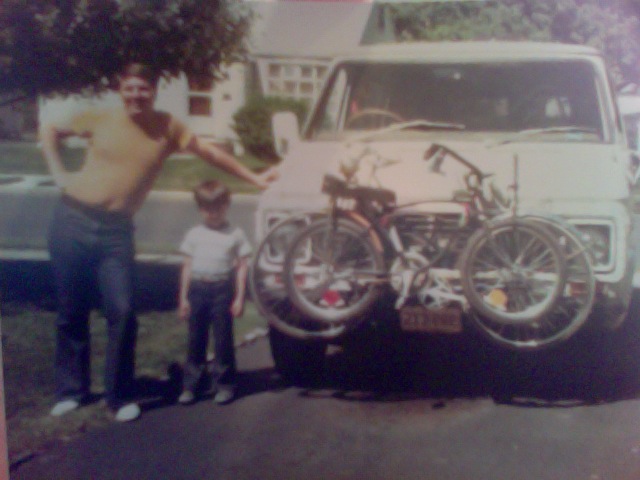 During my childhood years, my father loved to purchase big ticket, unexpected and unrequested items without my mother’s approval. I think he liked to surprise us. Either that, or he was afraid Mom would nix his “great ideas” before he had a chance to execute his plans.

For instance, the morning of one of my birthdays we woke up to an organ (the two keyboarded instrument, not a body part) being delivered and settled into our living room. I thought an organ was an odd birthday present, especially since I had never asked for one. The birthday organ was a new, giant piece of furniture to squish into our cape cod. Mom was now forced to organize lessons, which I had to take. None of us saw that one coming, but learning how to play and read music is a skill I’m glad I learned, so in hindsight the gift was “useful.”

Another time, Mom and I came home to find that one of our living room walls–the entire wall– had been covered with a wallpaper photograph during the time we were gone. Guess what of? Outer space, Blogtropolis. Mostly black, the bottom of the mural portrayed the moon’s surface while the earth proudly took center stage at the top of our living room wall. As you stood in the living room and looked at the wall, it seemed as if you were standing on the moon, gazing through space admiring the view of the earth. I kid you not.

Mom and I stood in shock, jaws dropped to the floor, as I wondered what my friends would think, and pondered what it would be like to live in a normal family. Eventually, though, I decided the mural was kind of neat and convinced myself that the organ looked great backed up against the stars, with the earth floating above it. Like an organ floating through the universe. I’m not quite sure if Mom ever warmed up to her planetarium-themed living room.

However, my favorite Dad-purchase memory is when he pulled up in front of the house in a giant, industrial-sized tan van. Completely empty. Two seats and metal floors and nothing else.

Being a kid, I was excited for any new structure I could explore. I ran outside and climbed in and danced around the back of the van. I still remember the echoing, shrill sound of the metal floor as I stomped around the empty space. I vaguely recall a “discussion” amongst the parents along the lines of, “it just needs a little work.”

And work Dad did. A black vinyl bench seat was bolted into the floor as a back seat. If it had seatbelts, I never saw them. Then, Dad built three wooden coffin-looking storage units that doubled as “beds.” He placed them in a U-shape around the sides of the van under the side windows (which he had tinted brown), and the rear of the new back seat. Each one opened with a hinged door, and in case you were wondering, we slept on them, not in them. Our tons of crap went inside them– tents, stoves, tarps, emergency equipment.

It wouldn’t be the seventies though if he didn’t cover the “beds” and the entire floor of the van with an indoor-outdoor carpet. Striped. Oranges and browns of course. The carpet was that plasticy, looped carpet, and if you pulled it just right, you could unravel the entire thing. I think Dad even covered the remainder of the exposed walls of the van with marble-patterned linoleum tiles.

Finishing touches included an 8-track tape player to listen to John Denver and other weirdo seventies singers, printed curtains to cover the windows, and a leather cover for the spare tire on the back door of the van that at one point read “Keep on Truckin’.” The Grooviest Van in the World also sported a CB radio, and we all had “handles” that were fire department related, since Dad was a fireman (I think I was “Baby Bell”). Perhaps the most telling sign o’ the times was the cup holder that swung on the center console, above the 8-track, between my parents’ seats. Let’s just say that soda cans weren’t swinging around in that cup holder, folks.

We vacationed in this van up and down the east coast for years during the late seventies and early eighties. My brother and I would bounce around in the back seat, sleep on the coffin contraptions, play games, fight, complain, argue, and all that fun stuff. Nowadays these poor kids are strapped to their chairs (safety is so boring!), but back then, my brother and I rolled around unrestrained while “Rocky Mountain High” played on the state of the art speaker system. (Note: The van had a sound system but no power steering).

We went everywhere in that van. We camped in Florida, the Carolinas, Georgia, Tennessee, and Virginia. We off-roaded on sand dunes. We explored and learned and played and fought and got lost. Sometimes we dragged a grandparent along with us.

With Dad as our Commander-in-Chief, there was no stopping once we set off on his schedule. Usually he’d start trips in the middle of the night, while we dozed in our sleeping bags on the coffin beds. Why the middle of the night? Some theory about traffic and going through D.C. at just the right time. I don’t know. He had his reasons. We’d sleep, he’d drive. We’d ask to stop to pee and he’d say “no.” We’d listen to truck drivers chattering on the CB radio about women and traffic and weather and hidden cops (“Smokies”). I recall a time when Dad had road rage while driving through a southern town. At a red light he leaned out of the driver’s side window and yelled to the car in front of us, “You better stop hitting your brakes or you’ll have a van up your ass.” Yep, we were THAT van with the Jersey plates. Ahh, the fun never ended.

Once we ventured to Plains, Georgia to visit the home of then-President Jimmy Carter, and to buy Dad some “Billy” Beer (The President’s “black sheep” little brother had his own name brand beer, which intrigued Dad, who needed to fill the aforementioned cup holder with a souvenir.). We toured a “peanut farm,” drank Tab, and bought President and peanut-related knick-knacks. On the return trip, my brother and I fought and he threw my new, pink peanut-shaped pencil topper eraser out the van’s back door window onto the Interstate. I cried. I tried to throw his stuff out the window. We got yelled at. We stopped talking to each other and retreated to our “sides,” complaining when the other would infringe on our space (“He’s touching my side!” “Her leg is on my side!”).

After a long trip to Atlanta, Georgia, we climbed Stone Mountain, and I famously declared, “If I have to walk one more step I think I’m going to die.” My mother still throws this quote out there once in awhile. What can I say? I was in a dramatic Gone With the Wind/Scarlett O’Hara phase. I also remember visiting The Grand Ole Opry and standing on the stage, visiting Nashville, and camping right on the beach in Myrtle Beach, South Carolina.

My dad’s always been a strange bird, and buying that van was one of the strangest, most wonderful things he ever did. It allowed us to discover parts of our country and its history together. Not to sound like a “we-walked-uphill-in-the-snow-both-ways” type of old lady, but I am glad we didn’t have the comforts of the minivans of today, with their bucket seats, DVD players and individual headphones. We made due with what we had, and turned an empty metal van into a vessel of family “fun” and lifelong memories. Good times, for sure!