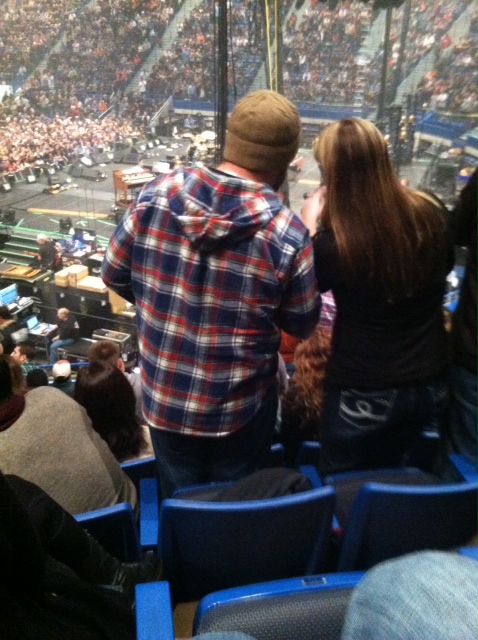 I wanted to tell you all about my AWESOME weekend but I have to disclose that it’s 10:42 p.m. exactly as I type this first sentence– which is late for an old lady like me, so we’ll see how it goes. You may run into typos and terrible grammar, but I’m just going to barf this out for now and hope for the best. Due to pressure at work (which totally blows), I haven’t been able to write.  I may have to give up my idea of doing NaNoWriMo. It all just sucks. But that’s a post for another day…

This past weekend, Joe and I went to Hartford, CT to see Pearl Jam perform at the XL Center. My one word review:

Let me start from the beginning.

Actually, I won’t start from the very beginning because that means I’d have to disclose how I almost filed divorce papers after the first time Joe and I went to see PJ in Philly. Let’s just say that he owed me, so the Hartford trip was his way to repay me.

The concert was on Friday night. Of course, I put in for a vacation day about a month earlier, but guess what? My twenty plus bosses decided that Friday the 25th would be a great day to do their annual rompings (did I say “rompings”?  I meant “reviews”) of my department. So I had to go to work in the morning. Thanks to changing my name to my husband’s after marriage, the alphabetical order of the reviews put me first, at 10 a.m. (had I kept my maiden name I’d be fourth- Thanks, Joe!).

After a stressful review (that started about forty minutes late without apology), I was home by noon and ready to change from my suit into my Doc Martens.  We packed everything up, instructed the grandparents on all things kid and dog related, and headed north around 2 p.m. for our two hour and fifty-two minute car ride (according to Google Maps).

We thought our traffic trouble spot would be the George Washington Bridge, but we flew over that without even stopping, courtesy of our EZ Pass. The Cross Bronx Expressway was its usual congested but moving self.

Then we hit Connecticut.

Ugh. When you are sitting in bumper to bumper traffic, the last thing you want to see is the digital road sign that says, “DELAYS- 26 MILES.”  NOOOOOOO…..

About an hour later, we reached the rest area for the Connecticut Welcome Center. Joe went to the help desk for an alternate route (where the lady behind the desk guessed he was going to Hartford for the PJ concert- yeah, we looked the part) and I went to Dunkin Donuts for coffee. Luckily, I had the foresight to buy a couple of donuts. Unbeknownst to us, our grand plan of hitting Hartford by 5:30 and eating dinner prior to the concert would be foiled.

We didn’t get to Hartford until 7:30– the time printed on the concert ticket. We quickly checked into the hotel. I had the bright idea to get a room near the concert venue so that we could drink prior to and during the show and walk to and from the hotel.

Well, there’d be no eating or drinking prior, as we high-tailed it to the XL Center. We knew that there was no opening band, so we wanted to get there, get some drinks at the arena, maybe a tee-shirt. You know, do pre-concert stuff. (For those of you who follow along, I was abandoning my gluten free lifestyle for the night).

We decided to find our seats first. Although our ticket was “obstructed view” I think we had some of the best seats in the house. We were about eleven rows up on the side of the stage, closer to the back than the front, but still– we were so close and had a great view of the band. We overlooked the roadie area where all the computers and sound boards (?) were set up, we were over the staircase where the band entered the stage. Luckily the stage was open, so the only obstructions were some wires and technical stuff.

Once settled in our seats, Joe set off to find us some beer and food, and I sat around people watching and texting. I felt instantly transported to 1993. Angela had sent me this article comparing Pearl Jam’s longevity to the Grateful Dead’s, saying that PJ was my generation’s GD. Looking around, I could see the truth in that. Us fans were mostly older- I’d say I was probably the average age (early 40’s) and people broke out the flannel, the jeans, and yes, like me, the Docs.

As I sat and looked at the stage, my first thoughts were: I’m a (I’m going to curse here, beware) fucking asshole for working in my job. I thought that because (a) I may have been stressed out from my review still, (b) I really have burn out from my job, and (c) there were about 20 people doing cool things on the stage that I thought were better jobs than mine. I mean, following Pearl Jam around and setting up guitars and testing the drumsticks and hooking up speakers and crap?  Sounds like a dream job to me. I wondered if they were “union” and then would have to stick around for Drake (who was scheduled to perform the next night- talk about demographic change), and then Phish (scheduled for Sunday).

As I pondered how I’d drag the kids around in my new career as a roadie and when I’d find time to fit in electrician school, Joe returned empty handed.

Me:  *looks at Joe with questioning wtf look*

Joe:  They only take cash.

Joe:  I waited on this long line and finally got to the front and they only take cash.

Cash? It’s 2013! Who carries cash? And beer was $10 per can! Who carries THAT much cash? Joe said the man behind him on line offered to buy him stuff which I thought was incredibly nice (related to the niceness of the Hartford crowd, one concertgoer tweeted that she’d left her iPhone on the roof of her car during the whole show and it was there when she got back to her car afterward. Go Hartford!).

No cash. Then I wondered if I really HAD been transported to 1993 and this was all some weird time warp! Needless to say, we remained thirsty, and suddenly my decision to buy us the donuts earlier at the rest stop at DD was pure genius since the donuts would be the only thing we’d eat for the next 12 hours.

Look at that, over a thousand words and it’s 11:14 and I haven’t even gotten to the concert yet.

If you’ve ever had occasion to see Eddie and the Boys in concert, you’ll know that it’s maybe the best show you’ll ever see. They came on at 8:30 or so and played until almost midnight.  Two very short breaks. I mean, three hours? They’re Pearl Jam. They could have played for an hour and a half and we’d all be happy, but three hours is, I’ll say the word again– Amazing.

Eddie’s voice is amazing live and his energy is mind-boggling. Besides the songs that featured certain instruments (if that makes sense, it’s almost midnight), he really is the show. I have to tell you this:  First, he’s a nut. He’s running around the stage doing his crazy moves, literally swinging on the lanterns that hung over the stage, swigging from whole bottles of wine. He loved to reach out into the audience and pour the wine into their cups (I guess they remembered cash). After almost every song, he threw his guitar pic into the crowd. He seemed so genuine and happy and grateful. Maybe you’d think it was an act, but to me he seemed legit.

The lights were on in the audience for a lot of the songs, like he wanted to see us. It was sort of uncomfortable for us, in that we had to actually see each other and the antics happening, but it felt kind of neat, like we were part of the scene, as opposed to when just the stage is lit and we are only spectators.

Joe thought maybe there was honey water in the wine bottles, not wine, because we couldn’t understand how his voice could hold up. He was sharing though, which made me think it was really alcohol, and by the end of the night, he was jumping onto speakers and body surfing the crowd (in an almost 50 year old way- nothing crazy- security interfered and carried him back to the stage promptly).

There was a minor verbal interlude about the Second Amendment and gun control, and the band recognized the losses at Newport and certain charities. Mostly though it was just pure enjoyment.

Great music, great fun, an awesome night.  I can’t wait to see them again on their next tour.

Here are some pics.  I have to go to bed before I turn into a pumpkin.  I didn’t edit this post, so again, apologies!

Have a great night!